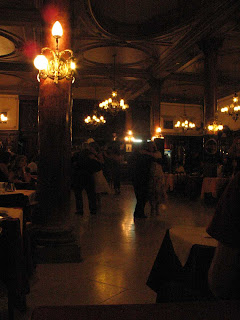 Interesting the persistence of the Beatles here. I think you're more likely to hear them in public than tango. T-shirts, posters, they are still everyday culture here, while the tango in everyday view is aimed at tourists.

La Academia Tango Milonguero is run by Susana Miller and Maria Plazaola (who was Carlos Gavito's dance partner). Tango Milonguero in anything as formal as an Academy sounds a bit like doing a Masters in order to dance jive. The first part of the Friday night class at El Beso was warming up exercises, walking exercises, and then embrace. A big class, and more women than men for a change. I couldn't help seeing a symmetry between a male-taught class with more men, and a woman-taught class having more women. Anyway, there was nothing very striking about the first half. The second half divided absolute beginners from intermediates, who started work on the ocho cortado, with an emphasis on maintaining close-hold contact. The ocho cortado has followed me round the city: every class seems to look into different ways of beginning it, leading it, and exiting from it, all of which is extremely useful. Susana Miller (like Oscar and his son) taught the lead with a very tight backstep, so it is possible to sweep the partner around 180 degrees just by unwinding the body: the feet just turn on the spot. Treat the body as a bandoneon, follow the flow of sound. I begin to feel how positive a lead can be, short of being brutal. I'm told to relax my shoulders, and “Lejos! Lejos!” Distance! Distance! Look into the distance: keep your head up and don't look down. Advice that follows me around.

It was entirely an Argentinian evening, and also a class where people knew each other: the first 15 minutes seemed taken up with kissing, one kiss only and on the right cheek, Argentinian style. But I followed enough to get plenty out of it and the teaching was thorough, serious, no-nonsense. The evening ends with a practica, which I didn't stay for.

I'd decided to go on to the Ideal, as it's live music there, the Unitango orchestra, and it's an evening organised for dance rather than tourism. I didn't get a dance, didn't try, but watched with much interest an older guy dancing: undoubtedly local, milonguero, and individual: nothing elaborate, but his feet were dancing, constantly moving, shifting, turning, with little kicks and shifts, a loose and elastic movement in the hips and ankles, a slight bounce, and always with the music. Milonguero that wasn't learned in an Academy, milonguero as a lifetime of listening to the music, dancing and watching rather than learning a 'style' of dancing. I was particularly struck by his milonga, which I recognised immediately as the kind (tho' not the quality!) I dance when I can't avoid it: just simple milonga lisse, just a few moves, nothing elaborate, the feet moving constantly, rather than traspie, which he didn't use, simple, clear and with the beat, as ever, totally part of the music. Which encouraged me not to feel inferior about my milonga.