Sometimes I'm not sure how far to take Tangocommuter. After all, a blog with that name ought to be about tango, but on occasions it's been about other things altogether, things that interest me but perhaps no one else. Perhaps the name was shortsighted of me: something a bit more general might have been better. I wonder about publishing notes about films I've seen, exhibitions, places I've visited... I've even thought about a separate blog for the non-tango stuff, but TC might get a bit thin on the ground, especially now that I feel I've got through a time of discovery of tango, and I don't want to start repeating myself. Anyway, this one has a vague tango connection.

Last September I posted about Argentine author Julio Cortazar who was in Buenos Aires during the 1940s into the 1950s, and has left an unromantic but no doubt accurate description of a milonga of the era. He left Buenos Aires for Paris in the 1950s, and while there wrote a story called Las Babas del Diablo, 'devil's drool', which was read by Antonioni who adapted it for screen and called it Blow Up. Cortazar's story has no murder, nothing sensational, just a momentary uneasy encounter between an adolescent and a well-dressed lady, observed by a man in a car.

I've just found out where Cortazar got his story from. He had a friend in Paris, a young Chilean photographer called Sergio Larrain who had an extraordinary eye for street photography. Larrain found that uneasy encounter between two people in one of his enlargements. It wasn't why he took the photo, and he wasn't aware of it as he took the photo; it was just there in the blow-up. The story obviously resonated with Cortazar, and in turn with Antonioni too. But I much prefer Larrain's original story. Cortazar imagined he photographed the scene, thereby disturbing the participants and giving the young man the chance to escape, so the scene ended. Larrain didn't notice the scene until much later, so it was open-ended. He must have sat and looked at his blow-up and wondered what happened next.

You can hunt down his photos on the web. I love this: 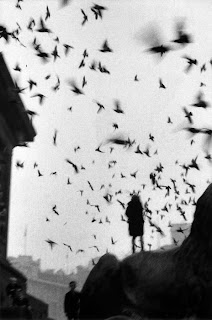 It's not a photo of Trafalgar Square: it's an image made in Trafalgar Square that is open-ended, as images are: the difference between a photographer and a person with a camera. It can be seen in different ways by different people, and it's new and marvellous to look at. All his photos are.

He's not so well known because he dropped out in 1972, went and lived in the Andes, meditating and teaching yoga. He gave up photography and painted. He died a few days ago. I found the story here.
Posted by Tangocommuter at 00:56 2 comments:

On being a tango commuter 2

It was mainly because I moved out of London, but it was also an accident of timing. In the early 2000s Ricardo Vidort and possibly Gavito taught regularly in London. I was lucky enough to come across what was probably Ricardo's last class ever in London soon after I started. I say 'come across' because I'd no idea who he was; I turned up that evening quite by chance. Later I realised what a wonderful chance it was, such a relief after miserable classes spent in a futile attempt to master Pablo Veron's choreography, wondering where the music had gone to. & it was Ricardo who said 'Hold your partner close!' That one class gave me a glimpse of the kind of energy and life, the sheer enthusiasm and happiness tango was, or could be. No wonder I was dissatisfied with London tango as I was encountering it.

Six months or so later, when YouTube got going, I found another name, or pair of names, Tete and Silvia. You mean BsAs tango isn't a salida, then an ocho, then a giro, then an ocho cortado, then a cross? It all runs together in one impulse, one energetic movement that relates so closely to the phrases of the music? That's what I want! I watched Ney Melo's videos over and over, open-mouthed. Thank you so much, Ney! No one taught that, let alone danced it, in London! From YouTube I began to realise that Tete and Silvia taught all over Europe, but never in the UK: since I could never find advance dates for their Europe tours I decided I had to go to Buenos Aires and hope they were there. I knew by then that Ricardo Vidort had died, so I went to meet Tete and Silvia. & they were there. More enthusiasm and happiness, and the moving presence of a couple who loved nothing more than dancing together. & of course there were others too who danced the tango of Buenos Aires.

So when I'm asked what I think of the European 'festivalitos' I have to say I really don't know. (Why 'festivalito' by the way? Why the diminutive? They aren't small, are they? & I think 'fiesta' would be the usual Spanish; doesn't 'European Tango Fiestas' sound much better?) On my first trip to BsAs over four years ago, I couldn't understand or communicate a lot, but I could get by. I didn't get many dances at first, but I was usually very satisfied with what I got. So for four years, during which time the 'festivalito' movement has grown so wonderfully in Europe, my tango thoughts have been elsewhere. & I think the teaching of close embrace social tango in the UK has generally got itself together during that time. Not that I've paid much attention to it I'm sorry to say; I've usually got plenty enough memories from a dozen or so classes stacked up in my mind to keep me occupied between yearly visits. (I call them 'classes' but for the most part they are practica sessions with portena dancers with long experience of the milongas, whose feedback and advice is incredibly valuable.)

It's as if there was a gap in London teaching between the early 2000s and 2010, give or take a few years. Dancing close embrace when I started seemed something of an endeavour: perhaps it would have been in 2000 too, but at least at that time there were sometimes teachers who encouraged it. & if you want to dance close now it's not hard to find people who can help and support and encourage you. This blog, and others, partly grew out of trying to make sense of and communicate what we were trying to dance at that time. It seemed all very new, and it took a while to find teachers who could help make sense of it.

I do look forward to taking part in a 'festivalito'... the diminutive is really irritating! Start again: I look forward to taking part in a great tango fiesta! I'm sure there's good dancing, but I know I'll always want to go back to Buenos Aires while it's still possible to sit in wonderful milongas and watch and meet dancers with over 60 years of tango behind them, and I'll probably still want to go there after they've gone, too. I'd urge everyone to think of taking the plunge while those older dancers are still there and on the floor; it's something else altogether. & I have to say, as a city it does start to get under your skin, resist it as you might.
Posted by Tangocommuter at 01:11 9 comments: 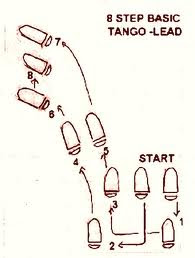 February again, and as ever I think back to a small basement below the Welsh Centre near Kings Cross, London, some years back, where someone later to be known as Tangocommuter took a few first tango steps, which have led to some wonderful evenings, some great friendships and much more besides. The music was almost certainly D'Arienzo, although it would be year or so before I'd recognise the name or the music. & of course the lesson was walking, and the '8-step basic'. The same way most of us have started out, I expect.

There's a tendency these days to knock this 'basic', but I don't think it's that bad, particularly if it's in six steps. (Eight steps starts with a backstep: not a sensible thing to teach beginners!) After all, after that class I was on the floor in the milonga upstairs, trying to dance that 'basic' with a partner I'd met in the class – and she's a good friend to this day, and we enjoy a dance or two whenever we meet. It didn't turn out badly! No one will ever get to dance tango without actually being on the floor with a partner, and this 'basic' starts people off pretty effectively.

Of course, it's not what you do it's the way that you do it. Lazy teachers suggest that this 'basic' is a pattern of steps that you follow, a choreography, instead of one possible collection of individual steps that can be varied. Maybe teachers who use it should make it clear that, just as the leader takes one step to the left, he/she could then take another step to the left. Or a step back to the right again. So how does the leader communicate the intention to do this? & that, I think, is where tango starts, the leader composing and communicating with the follower. & it's where lazy teachers screw up their students, and screw them, too, by suggesting they need ever more classes where they pay to learn more and more choreographies, when what they really need is an explanation and demonstration of how individual steps can be linked, and how the intention to move can be communicated through the embrace. There's never going to be tango until leaders learn to communicate their intention. When you follow a choreography you don't need to communicate anything at all because your partner knows what's going to happen – which is boring.

It was a year or two before I started to figure out that the choreographies taught in classes weren't discrete entities, they were just more or less ingenious ways of connecting together units/steps that were already familiar. Suddenly I had the feeling that this endless material I was struggling to master belonged to me already. It was mine! That was at least a beginning...

Last summer the BBC gave a rare (these days) treat of a series of dance programmes, which included a programme featuring the conductor Charles Hazlewood bravely exploring the world of dance. (It takes courage to explore the world of physical movement on TV!) One of his visits was to Trinity Laban in Deptford, where he took part in a class. His teacher explained the teaching of Rudolph Laban: 'Dance is made from movement. Movement is, if you like, the raw material of the art form. But quite often, in practice, people come to dance through learning steps, or learning styles or learning techniques, and not necessarily understanding the structure of movement itself.' Thinking back to grim afternoons and evenings spent in futile attempts to perfect back saccadas in intermediate classes, 'understanding the structure of movement' seems a refreshing approach, perhaps not for complete beginners, who need structures like the 'basic', but at least for those who are becoming a bit more confident.
Posted by Tangocommuter at 16:07 3 comments: