Tango came up fast. What was tango until the late 1920s? The names that have survived are Canaro, Firpo, Fresedo, Donato, Lomuto and the newcomer, Julio de Caro. Canaro in 1925 was metronomic. The beat is absolutely precise and controlled, march-like. It's a bit stiff to dance to, it's played without much emotion: the music is there, but there's not much depth of feeling in it. Much the same for Firpo. Feeling floods in with De Caro, from his educated classical background.

I can't resist including this photo of de Caro and his sextet. There's no doubting the year because in 1925 he took on a talented second bandoneon, Pedro Laurenz, then just 23, to play alongside the other Pedro, Pedro Maffia. But Maffia left the band in 1926. Such a marvellous photo: imagine going to a milonga and the band dressed like this, as formal as an international string quartet, although de Caro, just 26 himself, stands a bit at ease, slightly proprietorial, one hand resting in a pocket, his Stroh violin and bow hanging from the other. A 26 year-old who's achieved something new and very popular. In 1934 Laurenz was to leave and start his own orquesta – with Osvaldo Pugliese as pianist. 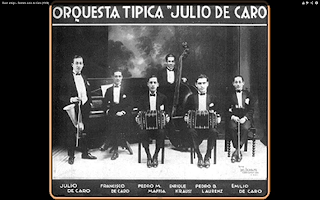 So, tango at the end of the 1920s. Here's Canaro, Tengo Miedo, 1929.  (These tracks open in YouTube, as it's easy to access.) It's fun, but compared to the tango we know now, the beat is very precise, it's stiff to dance to, it's rather 'straight'. Perhaps it suits canyengue better than tango. The notes are there, but hardly the feeling we expect.

Here's Julio de Caro in 1930. It's closer to what we expect, but it still doesn't quite make it. There's much more feeling, perhaps too much in the violin, and at the expense of rhythm.  De Caro recorded a lot, but it's rare to hear his music in the milongas now. A kind of sentimental late romanticism creeps in, slurring over the notes as if to disguise the rigid beat, as if he was uneasy with overly rhythmic music. I like listening to it, but it's not great for dancing to.

& since 1925 there had been a new band, the Orquesta Tipica Victor. Here's their version of Coqueta in 1929. (It's the first track on a playlist.) Suddenly we're in another world, and it's a more familiar tango world. It's simply a beautiful piece of music and it's beautifully played, full of feeling. It sings. There's variety in the arrangement, alternating smooth, legato phrases with stronger rhythmic chords, and using orchestral textures, the high violins and the lower sounds of the bandoneon and, I think, a cello. The phrases surge with life, and fit effortlessly together. The rhythm is clear and assured, but it's varied and never overwhelming. Easy to imagine yourself dancing to this late at night with a favourite partner: it's music full of tenderness.

The OTV was directed by Adolfo Carabelli, who had his own orquesta too. & if Coqueta sings, the Orquesta Carabelli's El Pensamiento (1932) swings. My ear caught the bass line behind the singer: it sounds so familiar you hardly notice it. OTV and the Orquesta Carabelli swing throughout: they have the trick of playing one note a little long, and the next slightly shorter (or vice-versa) so the beat is emphasized. & somehow the sound is full and consistent, whereas the sound in Canaro and de Caro seems to be patchy as if they're not quite sure what to say. With OTV and Carabelli I suddenly begin to hear a kind of tango that is fully recognisable. Tango didn't take the direction of Canaro's formally precise beat, nor the romantic excess of De Caro.

Of course, there are examples and examples. Canaro in 1929 could sound more sensitive,  and there's a great clip of De Caro playing both for stage and social tango: his music here is a much more recognisable tango. The film, Luces de Buenos Aires (1931), features Gardel, and shows how successful De Caro was. Incidentally, the clip shows stage tango from 1931, exaggerated then as now: the social dancing in the clip is relatively smooth.

So who was Carabelli (1893–1947)? He was older than de Caro and a few years younger than Canaro. Todotango has it that Canaro grew up playing a home-made violin for coins on the back streets of San José de Mayo in Uruguay, while Carabelli studied composition, harmony and counterpoint as a child. A prodigy on piano, by 15 he had performed in Buenos Aires concert halls, so he was sent to Europe to continue his studies. He was accepted at the Lyceum of Bologna, where he studied with Busoni, himself a child prodigy, a piano virtuoso from an early age. Busoni is chiefly known for his opera Turandot, and for an unfinished opera, Doktor Faust. He's also known for many piano arrangements of J S Bach, music he seems to have had a close feeling for. He thought of music as without prescriptive labels, and in 1907 he had written about the possibilities of microtonal and even electronic music.

At 20, in 1913, Carabelli graduated as a Master in Composition. (The first performance of Stravinsky's Rite of Spring was in May that year, which Carabelli must have been aware of.) At the outbreak of the First World War he returned to Buenos Aires, where he played the classical repertoire with the Trío Argentina.

Then in 1917 he met the Russian pianist Lipoff, who was touring as pianist to Ana Pavlova, innumerable dying swans worldwide in the twilight of her career. In 1914 she'd left Europe for the USA with her husband, her touring career in Europe presumably cut short by the outbreak of WW1. (In 1917 she also danced in Lima, Peru, where an English boy called Frederick Ashton was taken by his parents to a performance. He was so impressed, he made dance his life. Sir Frederick Ashton became famous as a choreographer, a co-founder and director of the Royal Ballet.)

Todotango adds: 'Lipoff had a wide knowledge of jazz music; Carabelli marvelled with this expression and he devoted to it definitively'.

The earliest jazz recordings were made in 1917. They were successful, and led to the worldwide popularity of the music, but in 1917 you probably got to know jazz from written music and by listening live. If Lipoff was Pavlova's pianist when she arrived in New York in 1914, he must have heard jazz live there, and he could probably reproduce what he heard. He could also have had a folder of sheet music as it's said Scott Joplin, WC Handy and Morton published sheet music. A broad range of pre-bop jazz existed in 1917.

Inspired, Carabelli started the River Jazz Band in Buenos Aires. In 1925 he was hired by Victor to lead an orquesta that could play jazz or tango, and he made his first tango recordings. He was able to choose excellent musicians. He recorded under his own name, and also as director of Orquesta Tipica Victor, with many of the same musicians. He directed the orquesta, played piano, wrote the arrangements, and rehearsed the musicians, many of whom would have trained classically in local conservatoires. The personnel varied, and included prominent players from the other orquestas of the time. Pedro Laurenz and Anibal Troilo both passed through OTV, as did other excellent musicians and vocalists. Carabelli continued recording jazz too, as well as versions of all the other popular dances of the day.

Carabelli was innovative in other ways: he recorded Milonga Sentimental with Carlos Lafuente in 1932, possibly the first recorded milonga in tango history. The words had been written by Homero Manzi the previous year. (It's on the Buenos Aires Tango Club CD of Carabelli.)

In 1936 Carabelli gave up leadership of the OTV, and made his last recording, a fox trot, in 1940, retiring to his home town where he lived by teaching until his death seven years later.
Posted by Tangocommuter at 23:56 2 comments: