Some wonderful, kind, beautiful, public-spirited, good-natured person has uploaded the whole of Les Indes Gallantes by Rameau, the 18th-century French composer, to YouTube. It's a Paris Opera and the Opera Ballet production; it was written as an opera-ballet, and it's an all-singing, all-dancing production, vividly coloured throughout, joyful, lively, visually inventive and sometimes ridiculously funny. Three hours of it, and I wanted more. Music played by Les Arts Gallantes with William Christie, one of the best period instrument ensembles. Subtitles in English. I'm going to have to buy the double DVD because of the music, and because it's such fine entertainment, exactly the cure for a cold, dark wet winter afternoon.

Sadly, this upload has cut out the encore, in which the entire cast and the conductor sing and dance to the best dance number in the piece. Generally the style of dance is basic modern ballet, but the choreography throws in stuff from popular dance, silly disco moves and all. There is also a stream from Balletoman.com which includes this encore. The subtitles to this version are in Russian, although it hardly matters, as the sense is pretty clear. But both the YouTube and Balletoman versions suffer from poor synch of sound and image.

Balletoman is organised by a Russian dancer and gives access to hundreds of dance videos: literally dozens of versions of the classics like Swan Lake, but there's a substantial amount of contemporary choreography there too, including, for instance, the whole of Pina Bausch's Vollmond (the one with the big rock and a lot of water). Also contemporary versions of the classics: Mats Ek's version of Sleeping Beauty is a great retelling of the old classic.

'Les Indes Gallantes': they are well-behaved in exotic lands. It fascinated me that in a 1735 libretto a French and a Spanish conquistador are shown as clowns. They are clowns in this production, and the script is clear; they try to bribe the Indian princess, and when this doesn't work they try to force her. She outwits them and laughs: she has thoughts only for her lover. People from exotic countries could be more 'gallant' than the French and Spanish.
Posted by Tangocommuter at 12:31 No comments:

Very saddened to open my laptop this morning and find the following brief email from Jantango:

Enriqueta died January 9, 2014, in her home in Buenos Aires.

I can't write much about her as I didn't know her at all well. But I remember 'classes' with her, December two years ago; it was hot and attendance was dropping off pre-Christmas. In fact, at the last class I was the only 'student', so it became another private class.

I have to use inverted commas because it was never as if she was The Teacher: people who came to her classes were there to dance, and she'd do what she could to help them enjoy it. With me, we just danced a lot, and I also enjoyed sitting and chatting to her, as we had common interests outside tango. She was a painter and a printmaker, too, and she'd begun working with glass: as she said, it's a nightmare to carry work around with you! She was cheerful and friendly, and I remember her as a tango friend as much as a teacher. I got a lot of confidence from the time I spent with her, and a better feel for dancing with different kinds of music. Sometimes you learn just by absorbing, and it helped that she was completely confident in expressing herself in English, as she'd lived and studied in New York and was truly bilingual. I used to see her two or three nights a week in the milongas. She seemed tireless on her feet, dancing mainly with the older guys.

Other than that, I know that she grew up with classical music, became an artist, and was absorbed into the tango world of Buenos Aires about 20 years ago. She'll also be missed throughout the States, which she visited regularly, as well as in Europe and the UK, although she wasn't here much. It's hard to believe I can't go back to another beautiful Buenos Aires summer like that, hot afternoons, courtyards cool with flowering plants, and an hour or two of dance ahead.

Posted by Tangocommuter at 15:13 No comments:

By Invitation Only - Redux

It's taken me months to realise that the title is open to misinterpretation, which perhaps is why some people objected. It might suggest that the organisers pick the guests they want at their milonga – which would be gross. 'Him, oh yes, he can come. But not that friend of his, no way. & she's all right, but isn't there anyone better?' I hope my description of the milonga left it clear that invitation is by personal recommendation: people recommend friends, and the organisers invite everyone recommended. My title might have given the wrong first impression.

Once again, I think it's a pity it's necessary to resort to this so we can enjoy a good afternoon of dance. But organisers here don't have the kind of authority some of them have in Buenos Aires, and the dance isn't generally understood or respected here in the way it is there. There are people here who've watched a few TV dance programmes, taken a few tango classes and go out and don't even notice how much disturbance they are causing. They probably think they are bringing a bit of life into a boring evening. All these couples making their way slowly round the room; let's barge into them, wake them up a bit!

There's also another slightly different system here: there are a few milongas that are open to all, but aren't advertised. You hear about them by being on a mailing list. This has a similar effect. There's a bit of a 'tango underground', but I can't see anything wrong with that, except that it's much harder for the organisers to make ends meet without open access and advertising. They do it because they enjoy a certain kind of milonga: in the circumstances the guest list is the only way to make it happen.
Posted by Tangocommuter at 17:04 2 comments:

Labels: By Invitation Only

Happy new year to everyone! 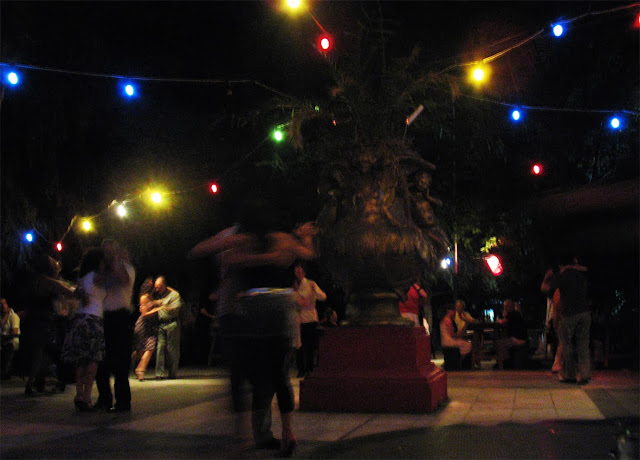 (Milonga La Calesita, December 2008. A memorable place to dance on a hot December evening. At that time, Tete and Silvia ran a weekly milonga there during the summer months: I don't know if it is still in use.)
Posted by Tangocommuter at 12:16 No comments: