'In case you have some friends coming to Asia in the near future, this is just to let you know that Cacho Dante will be coming to Hong Kong, Seoul and Singapore during October-November. I understand that this will be the first time he is coming to Asia. This was made possible thanks to my good friends in Hong Kong.'

The post is a year old now, a year old to the day, as it happens, so I thought I should drag the comment out into the open in case anyone is in Asia, or thinking of going there.

I took Cacho's classes a couple of years ago. I found him very disciplined and methodical in his teaching: he also takes trouble to observe everyone very carefully, and advise them on walk and posture. The stories he tells on his website suggest a lively, fun-loving guy, but he takes his tango teaching very seriously, and the classes are concentrated, hard work even, and an excellent preparation for long milonga nights. I've seen young portenos from those classes dancing in the milongas, and I thought they looked good. Tango teaching in classes is something new, but I believe that Cacho, balancing exercises with social dance with teaching sequences, has got it right. It's all in the approach: he's not teaching you to show off, he's teaching you to dance well, and he expects you to take him, and tango, seriously. Very, very welcome. The 'good friends in Hong Kong' who invited him are to be emulated!

His website has been updated and now has links to his YouTube videos, and photos of Cacho with his students around the world.

PS. Here is the blog page with dates from the organisers of the tour.
Posted by Tangocommuter at 14:52 5 comments:

So the tide has come in again. I may well be – I hope I am – the last person in Europe to catch up with these videos. They've been around for up to eight months, with many viewings. I hope I'm the last person to see them just because I hope everyone else has already enjoyed them.
It's such a beautiful, imaginative idea, to take El Flaco Dany to ten cities, film a brief class with him, talk to him about orquestas and dancers, and then a brief reaction to the city. The first city is Bucharest, and after showing a short milonga sequence and explaining it, he sits down with Lucia Mirzan and remembers the D'Arienzo orquesta and its performances. He then talks about a dancer he knew – Gavito – and then his observations on the local Romanian music, which impressed him. To date, there are three other videos covering the orquestas of Troilo, Pugliese, and Di Sarli, three singers, and the dancers Juan Carlos Copes, Osvaldo Zotto, and 'Puppy' Castello and their partners. Some well-chosen clips of these orquestas and dancers fill out the picture. The cities so far have been Tel Aviv, Frankfurt and Istanbul, and I assume that London will be among the other six videos still to appear, since El Flaco and Lucia were there recently. I look forward to these relaxed and informal conversations about music and dance, and to El Flaco's stories. The subtitles are in excellent English and seem to be accurate. It's a wonderful project.
Of the classes, the blog says that they present '...the basis of Flaco Dany’s milonga technique, as a reference in finding your own milonga style.' I particularly like that phrase 'as a reference'. This is material to be used as needed, not merely copied. (Well, as if anyone could copy El Flaco...)
The videos are on YouTube, but are collected on this page of the Flacodany blog.
Posted by Tangocommuter at 23:31 No comments:

Internet searches are a bit like the tide: you never know what's going to turn up amidst a mound of flotsam and jetsam, and YouTube recommendations are similar. Amidst a recent list of videos that YouTube thought might appeal to me I found genavel1's channel, which includes a whole archive of films of the 'Todaro era', of Antonio Todaro (1929-1994) and his followers.

The film of Todaro and his nine year-old daughter Títi has been on YouTube for a while, and this archive also includes him dancing with her aged perhaps around 13 or 14. The films are undated, but the dates of Todaro and his daughter would suggest that some of the filming goes back to the 1960s; many of the women are wearing short skirts (which may not altogether suit them). The locations look 'underground', barely decorated except for posters on the walls, but the lighting is very poor. & either the filming was silent or the recorded sound was so poor that the sound we hear was added later, so what we hear isn't necessarily the music the couples are dancing to. & I assume it was film: 8mm or Super8. Home movies! The dancers include Todaro, 'Petroleo', Raúl Bravo, Miguel Balmaceda y Nely. 'El Famoso Arturito, inventor de milonga traspie' is also there (ever heard of him?) The more recent clips have recorded sound, and these may be from the 1980s/1990s, and include 'Puppy' Castello dancing with Graciela Gonzalez.

A random look at the clips shows a familiar enough dance. What fascinates me about the dancing in these clips is the extent to which the women are empowered: their energy and input and determination equal that of their male partners. It really is a 'no holds barred' dance. It must have been fairly revolutionary and, like the short skirts, suggests profound changes in Argentine society since the early 1930s. It's not stage tango; it's too lively and disorganised for that, although a lot of skill and practice has gone into it. Nevertheless, I assume that stage tango is a refined version of it, replacing the audacious joyful fun of the original with a simulacrum of bored passion and sophistication. Despite the poor lighting, there's a real sense of enthusiasm, and people having fun dancing. Which doesn't mean I'd want to be anywhere near them on a crowded floor!
It's not the dance of contemporary milongas, which have gone in a different emotional direction. The affectionate embrace of milongas today is one of the great attractions of tango to many of us, and you don't see that in these clips. At the same time, this is part of the background to contemporary Buenos Aires tango. Many of the older dancers didn't go near Todaro and his academia, but others did, and this kind of tango would have been seen around, and I think everyone would have been aware of it. Tango and Chaos has a piece on Todaro that seems to sum it up very clearly. He doesn't actually say that Celia Blanco, who runs that most 'traditional' of milongas, Lo de Celia, was Todaro's student, but I'm sure I've read that she was: I wonder if that's her in the picture. Todaro might not be an obvious influence on the dance of contemporary milongas, but I'd assume he's there, and he's certainly there in the dance of dancers like Geraldine and Javier, and a host of alikes. To dance his tango requires ability, and a lot of practice, as well as a certain desire to show off. Innocent fun when you have space, and all your friends encouraging you, although many of us have other preferences.
I can't help wondering what happened to 'Títi', Todaro's hyperactive beanstalk of a daughter. I guess she'd be in her 60s now. Hard to think that she'd have turned her back on tango.

PS: The clip of Todaro and his nine year-old daughter is on Babaz's channel, which I see also has this clip  -- of Charlie Chaplin dancing tango. Hilarious, and much too short.

Posted by Tangocommuter at 12:11 6 comments: 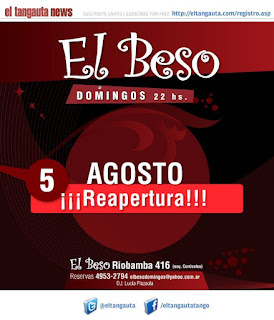 Posted by Tangocommuter at 11:04 No comments: