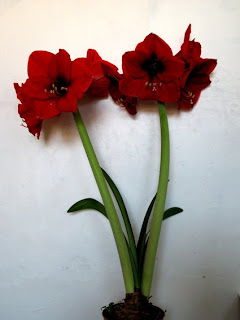 What is it with Hungarians and black and white film? Directors and cinematographers from that part of the world filled Hollywood in the 1930s and established film noire. & now Bela Tarr. I was totally gripped by Werkmeister Harmonies. Everything a film shouldn't be these days, slow, long, in black and white -- and no CGI. & yet completely riveting. You look more intently at something slow, you watch more closely. Long, long takes... where is it going? & yet only one take seemed over-long, the rioters marching thru the streets... and yet that had it's point, in sudden activity, the shocking senseless destruction of a hospital.

So, the madness of civil unrest. All this against the background of the corpse of a giant whale brought into town for show, and a musician working to retune instruments to the harmonic scale... A very charming interview is included in which Tarr makes clear that film shouldn't tell stories, can only show what is in front of the camera, the details of everyday life. Definitely no allegories. But the slowness invites to to dream, to expect, imagine meaning.

The tango week. At least one achievement: I led ganchos convincingly in L&R's class. The Dome that evening more chaotic than usual. E commented on it while we were dancing, and O left early saying it was too bewildering for her. A lot of couples standing still on the spot doing little, or engaged in furious spins. & almost everyone else dashing around maniacally. So it wasn't very pleasant for dancing. But I had an excellent evening at the Welsh on Friday.

Cherry blossom in the garden. Apple blossom about to burst. Planted out lettuces: plenty more planting to go.

Wayne Macgregors's Entity at Sadlers Wells. Very intense, it exists very much in memory as an entity, it's own reality, logic, rules, language. A fascination with the possibilities of bodily movement seemed to drive through it. Perhaps a bit lacking in range: intense, with tenderness and violence closely linked, throughout. But great to watch, great even just to watch those young wonderful bodies simply walking on or off stage.
Posted by Tangocommuter at 18:21 No comments: 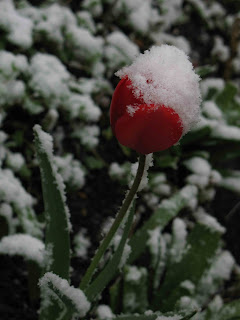 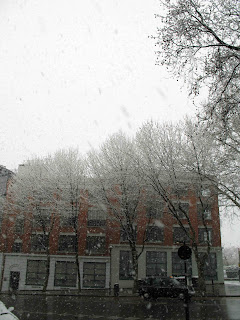 Posted by Tangocommuter at 21:38 No comments:

It wouldn't be fair to say it was a truly memorable night at the Crypt, because that's what I always think, but it was, nonetheless, a truly wonderful evening of dance, almost non-stop from 8.30 to 12.30. & the great thing is, I 'm hardly tired the next day. I just kept finding partners, and Nikki's music kept coming. 'Tango is a state of grace' as someone once said. Just occasionally it feels like it.
It was the night I first danced a really long set with L from the Tangosoul class. We just went on and on, there was no question of quitting until we were both too tired to continue and it was nearly the end of the evening. I get repetitive when I get tired. Never danced much with her before, but hope to again.

Snow. I went out into the street at 9.30 this morning, big wet flakes. Then the long way back, thru Ashford and across the marshes because of track work on the direct route. The snow arrived here late afternoon, the same big wet flakes. But temperatures aren't that low and it will melt fast.
Posted by Tangocommuter at 21:00 No comments:

Sunday morning Tate Modern, Juan Munoz. After Louise B, a hard act to follow. An evening with LB would be unpredictable, exciting, scary. Munoz' presence is gentler, calmer, but subtly unsettling, almost a rational, logical presence. Like LB he draws on memories and childhood -- the balconies, the drum -- drawing out their resonances. Strange tableaux. But nothing here quite lived up to Double Bind in the Turbine Hall a few years back. Figures reduced in scale and seen from a distance disturb out sense of distance -- are they full-sized, but further away? -- but when we are close to them, as in the room of 100 figures, they are just reduced in scale. In the Double Bind they were above and unapproachable in a strange 3D labyrinth. And large-scale pieces take a lot of space. Perhaps that's significant, but I wondered how many paintings could have fitted in there? LB's show crammed in much more work -- but then she's lived more than twice as long as Munoz.

All that seen while still enveloped in a very special Crypt night on Saturday. I'd taken a room so I could stay late, and it was a quiet night at the Crypt. It makes a big difference when, as a leader, I'm not constantly having to adjust for a lot of other people around. It was relaxed, easy going, which meant it was possible to concentrate on refining things I know and trying to use moves I haven't had a chance to practice much. But above all it was a very warm, affectionate evening. Tango is great when there's an emotional and physical contact, and somewhat meaningless without both. It's historical development from being a dance of desire to a dance of pleasure, affection, a shared temporary intimacy that displaces and refines desire.
Posted by Tangocommuter at 23:10 No comments: