Good news! Marina2x4 is uploading videos from Buenos Aires again after seven months. She's uploaded some of the best clips of real tango I've watched. ('Real' – that is, social dancing from the milongas.)

Her two clips of Susana Ferrante and Osvaldo Roldan attracted me. Osvaldo seems to have spent a lot of the past few years teaching in Europe although not as far as I know in the UK. Apart from these two clips his YouTube presence is just demos, which are slick and quick, but I get a better idea of him as a dancer from these two clips. It's neither a milonga nor a real practica, it's a dance in someone's large kitchen with a bunch of other like-minded tangueros. It's late afternoon, after an asado I'd assume, dishes and empty bottles stacked on the worktop. Alicia Pons is in the background – maybe it's her kitchen. People are drifting in to pick up their winter coats and kiss goodbye: maybe this was a month ago in Buenos Aires when it was cold and wet. Meanwhile, the tangueros have settled in for a few warm hours of dance. Que placer!

Milongas are more formal, and filming in milongas usually isn't this close up. Here you are among the dancers, and you can see that tango really matters! There's a real commitment and concentration, and it's a pleasure too of course, it's what they love doing. They put into it an intensity, an attentiveness, an energy that we'll probably never match. That goes for all the dancers in these clips; it's Osvaldo's profession, of course, but he's working at it even in a dance in someone's kitchen. I thought of that quote from Ricardo Vidort, "When you dance tango you must give everything. If you can't do that, don't dance." Posture is uniformly good. One thing I can't help noticing is the distance at belt level between dancers, which happens when posture is the classic good tango posture. In the European dancing I see I never notice that much distance at belt level. People tend to dance more upright here.

There's a great sense of the warmth and physicality of the dance. The embraces are full on, uninhibited, seriously close. (A London friend says: 'London close embrace is usually fake: it's a few centimetres short of a real close embrace'.) The camera is close up, so you can see how much upper-body movement there is, particularly in the D'Arienzo, as you'd expect. There's a range of ages, and of footwear too!

& the collision: in the D'Arienzo, the tall guy in the baseball cap takes a long backstep straight into Osvaldo's space. Unbelievable. It doesn't look as if he belongs here at all.

There's a second video of Susana and Osvaldo here. As for the dancing in the milongas, check out this video of a milonga at Lujos, also from Marina. The older generation might be departing one by one, but it looks as if they leave tango in its home city in excellent health. 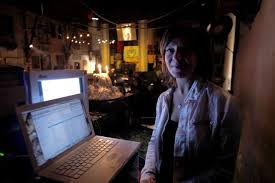 Silvia, who was partner of the late 'Tete' Rusconi, is in London for the week. She'll DJ at Juntos milonga this afternoon, and at Carablanca, Conway Hall in Red Lion Square, on Friday 16 October, 8pm to midnight. A good opportunity to experience an evening of music from a regular DJ at Salon Canning and at La Catedral in Buenos Aires!
Posted by Tangocommuter at 10:44 No comments:

Muma in Ojai, and online links to Ricardo Vidort

Posted by Tangocommuter at 18:37 No comments: