’It’s so crowded tonight’ said my partner. I glanced around. At a guess there was room for twice as many couples. ‘Not really crowded’ I replied. ‘It’s just that many people use a lot of space.’ I remembered dancing – trying to dance – on a heaving floor at Cachirulo in El Beso, when it was underground-like and really hard to move at all. Likewise at Salon Canning, a larger floor that could be very densely packed with dancers. Then I remembered the garage photo, a milonga in someone’s garage in Buenos Aires! I don’t know how many couples, shoulder to shoulder, happily moving to the music. But where did I see it?

Miraculously it turned up a few days later in the Practicaelbeso blog. I think 15 couples are visible, but that’s only part of the floor. In a garage. It’s hard to tell just how big or small the garage is, but in any case the couples are very close together, and they all look happy! 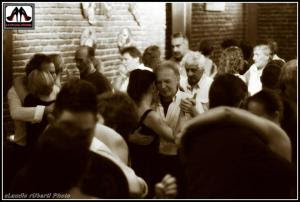 In turn, this reminded me of a wonderful London milonga, Tango al Fresco, ‘tango in the park’, and how, very sadly, it’s ceased to be run. To cut a long story short it relied on a wooden floor that could be packed away when not in use, and a group of volunteers who worked to set it up in Regent’s Park in June and July. It was very popular, an al fresco tango picnic twice yearly, and non-profit-making as the money taken went to planting trees in the park. The floor was a bit bigger than most garage floors (it had to be stored in a garage when not in use) but it could get tightly packed. & because there was often so little room, dancing had to be close and tidy. It was a pleasure to dance alfresco under the trees with such a crowd, and many of us miss it a lot. I briefly checked out photos of bandstands in the London parks to see if they could serve as milongas , but they don't look big enough. Dancing in small spaces isn’t entirely unknown to London tango. 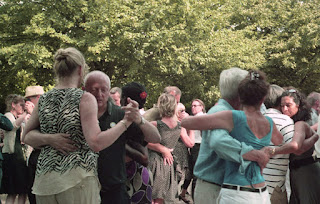 Posted by Tangocommuter at 22:07 No comments: