“Dance to express, not to impress.” I guess that sums it up. (This should follow on from the end of the previous posting. The blog order isn't properly sequential.)

I planned an out-of-city day yesterday: either to Colonia or Tigre. Colonia is a colonial-style town in Uruguay, a 50-minute trip across the estuary; Tigre is a 50-minute rail trip on the Argentinian side, the point at which the many islets and waterways of the delta end, and the river estuary begins. There were no boats to Colonia until the evening, and Tigre costs .48p for the return journey. Anyway, the delta sounded fascinating, and very South American.

I'd hoped to see countryside from the train but it's all built up, although the city high-rises give way to suburbs, little houses with courtyards. From Tigre you can take the local boat into the delta. Most of the islets are inhabited, small bungalows with neat gardens, trees and lawns, classical statuary, inevitably flowers everywhere. The boat is the local bus, stopping off at jetties along the way to pick up and drop off people. The locals travel out from Tigre with 10-litre plastic containers of water: the river is clean enough for washing, and people swim on the banks, but there must be a lack of drinking water, although there's electricity. You can stop off at, and walk round, one of the larger islets, most of which seems inhabited, and canoe the preferred mode of transport. Not sure what people here do: in any case you don't feel like doing a great deal in this heat and humidity. Could well be weekend homes for the wealthier city dwellers. It's quiet, with a lot of birdsong. Back in Tigre I walk to the Fruit Port, disappointed to find no fruit, fruit and wood being the main produce of the area. Plenty of wood, tho', and small stores selling things made of wood. Too much sunshine and humidity and I decide to curtail my sight-seeing. In the city the buildings are tall and there's usually shadow: here there's less protection at midday in midsummer. Enough is enough, I take the train back to the activity of the city. The estuary landscape is flat and you don't see beyond the trees, but huge clouds are building up far in the distance. 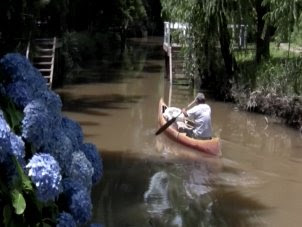 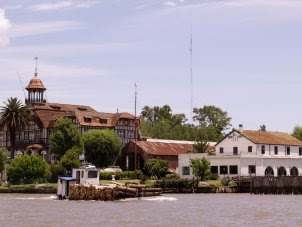 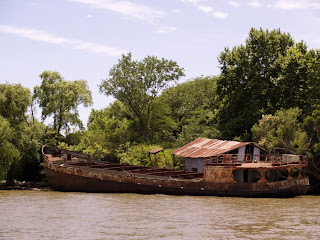 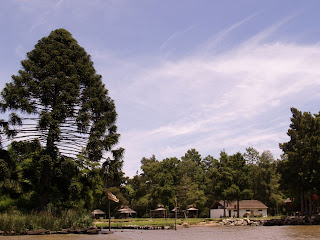 When I arrived in Buenos Aires I wondered why there was no fruit in this mediterranean climate, except for manky oranges, supermarket apples and hard pears. Then the strawberries arrived, then some nectarines, then apricots and finally grapes. Then it dawned: there isn't any fruit in early summer unless you import it. The nectarines, apricots and grapes are barely ripe but still fruit.

Late evening a long programme about ESMA and human rights on TV. I can't work out what it's about. This morning the BBC website informs me that the courts have just released on bail 14 officers accused of torture and murder in ESMA, as they've been in jail for two years without trial. "Today is a day of shame for Argentines, humanity and our justice system," said President Cristina Fernandez de Kirchner in a speech at ESMA. The pardons handed out in the 1990s have been ruled unconstitutional over the past few years but there have still been few trials. The accused are protected by democracy, but some of their victims were held for years without trial. True, Argentina was a mess mid-20th century, and cold war era politics played havoc with Latin America in general. & Che Guevara was Argentinian. Perhaps the military can be excused for attempting to bring order, but brutal sadism and murder are another matter.
Posted by Tangocommuter at 12:20