Thinking over Carablanca’s 25-years of providing opportunities for tango reminded me to look again at a Guardian article I read at the beginning of the year, based on a book called Going to the Palais by James Nott. It studies the history of dancing in large ballrooms (‘Palais’ as they were often called) in the UK. I’ve not read the book, so I quote the numbers from the article. In 1953 about four million people went dancing every week. It was suggested that up to 70% of couples first met on the dance floor. It was huge. It was the main way men and women met, the main social hub, attracting many more than cinema or football. Not that the dancing was necessarily elaborate. For the most part this wasn’t really ‘ballroom dancing’ even if it was dancing in ballrooms. A witness recalled, ‘The masses are content to shuffle. All they want is to get round [the floor] tolerably comfortably.’ Chatting as they went, of course. The enchanted silence of the tanda wasn’t the norm, but then the simplicity of the dance didn’t require that kind of attention.

In 1960 the business was booming, up 10%. Between 1958 and 1962, shares in the industry trebled in value. 50,000 musicians were employed in dance bands. Astonishingly, by the end of the decade, eight years later, the business had crashed. By the end of the 1960s few dance halls even survived. Most were demolished, a few became discotheques, nightclubs, or bingo halls. It was an incredibly radical change. It’s pointed out that women had become more approachable. Couples met at work, in pubs, in normal meeting places. But the main change must have been the change in musical tastes. Most of those 50,000 musicians lost their apparently secure jobs in a short period of time as the new music developed so fast, and became so popular. & of course the dance changed with the music. Jive, or the entirely ‘hands-off’ Twist require venues, but unlike the ballroom shuffle they were practicable in smaller venues, even in parties at home. Record players became ubiquitous and you could throw a dance party in your bedsit if you had a Dansette. Big formal events were no longer what people wanted. The ballrooms were an affirmation of an all-embracing society, parties an affirmation of small groups. 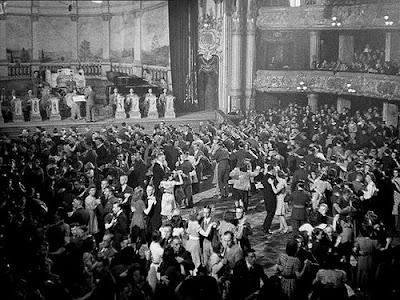