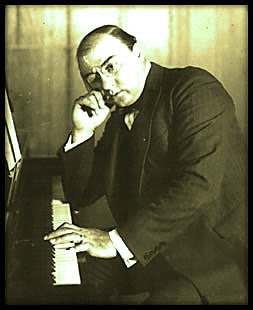 I posted here about the photo of Roberto Firpo's quintet (or sextet, since it's not really possible to work out the role of the sixth person, singer or musician) in a recording studio. He's not played much in milongas these days: Pedro gave me a compilation CD a few years ago, and that's when I first listened to his music. He lived 1884 – 1969, a close contemporary of Canaro, and made a huge number of recordings with his orquestas, so he must have sold well, but not a lot has been re-released. According to Todotango, from childhood he worked at anything he could to save 200 pesos to buy himself a piano, and said the day he bought it was the happiest day of his life.

This track at the end of CD 1 of the Grandes del Tango Roberto Firpo double CD really caught my ear! (The link opens a player in another website.) Solo piano, and more wistful, measured and melancholic than recordings I've listened to with his orquesta, perhaps more personal. The music somehow reminds me of a Haydn sonata, even simple Chopin, and the playing makes the structure of the music very clear. But somehow it also has an overtone of early jazz, Scott Joplin perhaps, who died in 1917. The rhythm is habanera, the milonga-like beat of early tango, but the playing is more romantic in style than early tango. A fascinating, elegant piece of music.

A while back I talked with a young BsAs musician and told her that my love of tango music seemed strange to me, given that I used to listen only to jazz and baroque. 'But there's a lot of connection between tango and baroque!' she replied immediately. 'Think about it!' Well, I've thought about it ever since without being quite sure what she was talking about until I heard this track. Tango orchestration might have the energy and sound and emotional charge of late 19th century opera, but perhaps she meant that the structure of the music is simpler and older, like an old house with a grand late-19th century facade.
Posted by Tangocommuter at 09:24