Vals in the minor, again.

Chopin! Thanks to Halbert for answering my query as to whether there were waltzes in the minor in European music. I was thinking about dance music, so I looked at the music of Johann Strauss, Director of Music for the Imperial and Royal Court Balls, rather than at the music of Chopin, the melancholic exile, music that wasn't written for the dance floor. Halbert's link in the comments might not work (Blogger doesn't make links in comments easy), but there's an extract here, while spotifiers can listen to the entire, very familiar, Waltz No. 7 in C sharp minor (Op. 64,2) of 1847.

And thanks to Chris, UK for the link to the Arolas version of Lagrimas y sonrisas on Audio AM. While on that site I found a version of Pabellón De Las Rosas by Arolas, also from 1913, which is in the major except for the ending. & I also found a version of the Champagne tango by Roberto Firpo from 1914: listening out for major and minor I realised that it starts out in the minor, moves into an effervescent major – and ends once more in the minor. Which I found amusing.

I explored the sadly short life of the wonderfully gifted Eduardo Arolas a year ago.

I'm fascinated by these old recordings of tango music from very nearly a century ago, recorded before the days of the electric microphone (around 1928). The sound quality isn't great, but there's a freshness and direct simplicity about the music. It was new music then: Pabellón De Las Rosas was written by José Felipetti who was born in 1890, so was only 23 when it was recorded. Manuel Aróztegui, composer of the Champagne Tango was born only two years earlier. 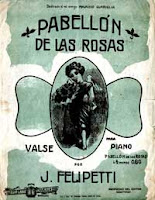