...so I awoke to find myself walking down the steps from a jumbo jet onto the tarmac at Heathrow at 7am. It was bitterly cold and raining. Walked over to a bus, and was shuttled to the back door of Terminal 5, where we had to queue outside in the rain while passports were checked, pretty much at gunpoint: that's just to get into the terminal. Immigration comes later. At baggage reclaim I noticed the flight had come from that city of hot breezes, Buenos Aires. The airport 'welcome' made me feel like I live in a war zone, where I'm guilty until I prove I'm harmless. You don't think about it once you're inside. You used to wave a passport, maybe get it stamped, and that was that. Are we really a country at war, in a secretive, undeclared way, and why? At 7am, after 16 hours in the air, I wondered for a moment if I wouldn't rather live in a country that's not managed to make so many enemies for itself. & Argentina is generally big enough to absorb immigrants, and always has been.

& a bit later, I'm practically snowed in. Not sure if I can get up to London for Joaquín Amenábar's workshops tomorrow at Tango en el Cielo. The early morning trains get canceled, and there's plenty of snow forecast overnight. 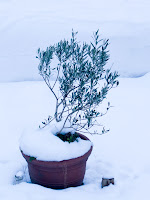 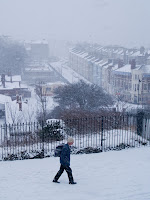 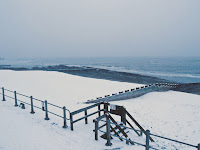 Still, I find it BEAUTIFUL and would love to be there, in the snow. What a pity you don't like it!

Many thanks for writing this blog.

Thanks, Anca! I wish you were here in the snow too, but I really wouldn't wish you to be away from the city of soft breezes and all the dancing you're getting there. Make the most of it!