Tango is full of legends and stories, so it's it's fascinating to have access to actual artefacts, especially old shellac discs and old photos and drawings. I've been scouring YouTube for the earliest tango material.

El Choclo, the tango, was so successful that the date and place of its first performance in Buenos Aires is known: November 1903 at the upmarket restaurant El Americano, Cangallo 966 (today Teniente General Perón 966), by the orchestra led by José Luis Roncallo. Roncallo could not announce El Choclo as a tango because the proprietor of the Americano forbad tango in his establishment, but the tune caught on and the band continued to play it because it was requested.

Not long after its Buenos Aires premiere, El Choclo was sung onstage at the Parisien Varitè Show, and subsequently recorded in Paris by the Orquestra Tzigan de la Restaurant du Rat Mort. 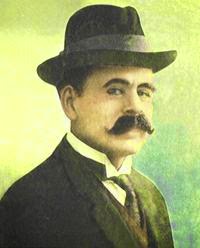 He's been described as part Hemingway and part Bob Dylan: curiously, he played guitar and harmonica and so invented a harness that would allow him to play both together. In 1903 Villodo also wrote El Porteñito, and in 1905 La Morocha, as well as a number of other tangos. La Morocha became very widely-known, and is said to have begun the European fascination with tango.

The April 1908 recording of El Choclo by the orquestra Tzigan de la Restaurant du Rat Mort doesn't really sound like any tango group I've heard. It sounds closer to a string quartet than a tango band: the violinist could be a classical musician moonlighting as a gypsy musician. But it's certainly very lively for its 110 years.

There are two other early recordings of Villodo tangos. This may be Villoldo himself singing and playing his song El Negro Alegre: the Victor discography lists the recording Villoldo made, 'Male vocal solo, with guitar', of the song on 12/26/1907. The laughter indeed sounds like Dylan... 1907, so it's actually a year before the recording of El Choclo, but I'm not sure if El Negro Alegre is really a tango, although it seems to be about dancing.

Finally, there's a recording of Ángel Villoldo's El esquinazo recorded in March the following year. Like the two other recordings it sounds incredibly sharp, clear and lively. A milonga from 1910. Three of the earliest tango recordings, three amazing recordings.

The Victor discography lists several recordings of El porteñito and El Choclo in  1906, and a variety of other recordings by Villoldo and by other orquestas of his music from 1906 onwards.

Since tango became so popular in Paris, Villodo travelled there, as did other Argentine musicians of the time. He was there in 1912, working with Alfredo Gobbi's parents, 'Los Gobbis', who were a hit in Paris: Flora de Gobbi had sung on some of the earlier recordings of Villoldo's music. Gobbi himself was born in Paris in 1912, and Villodo was his godfather. This was recorded by Gobbi 'père' in 1912, so presumably in Paris.

Along the way I came across another early gem, not a tango but a 'canción Proletaria', from Socrates Figoli, a 1906 recording. He's described as 'Payador Anarquista', a singer who traded verses with other singers in competition, which was widely popular in South America. Presumably Figoli and others expressed extreme political views in their verses. I like the melody with its strange move from major to minor: it sounds like a modal scale. Very melodic.

There's a slideshow of photos of tango embrace around 1900. One of the sources for this is El Tango en la sociedad porteña 1880 – 1920, the book by Hugo Lamas and Enrique Binda on early tango, which attempts a history based on contemporary sources (rather than on later embellishments), but the source of this particular photo (and its dating 'before 1900') isn't made clear in the slideshow. 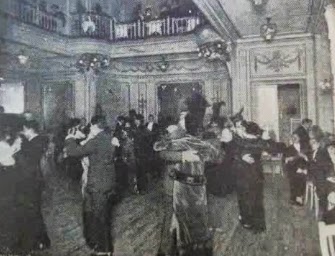 It's often said that close embrace dance grew up because the confiterias and dance floors in the city centre were small and crowded, but this photo suggests close embrace much earlier, on a dance floor that isn't at all crowded, and with a prosperous-looking clientele in an elegant dance-hall, people apparently enjoying the music much as we do today, perhaps 114 years ago.

I also came across this film of a dance dating from 1902. It's called 'Tango Apache' but probably has little to do with tango and certainly nothing at all to do with Native Americans. 'Apache' was the word journalists used to describe a brawl in the Paris slums, meaning 'savage', and the name was adopted by Paris street-gangs, who celebrated the brawl with a dance. Visually and dramatically it's lively stuff, but too extreme for a social dance, so this is a performance from 1902, while the rest of society went off to dance tango. Or that's the story. This dance may be an authentic Parisian 'Apache' dance, but the film is from an an American studio, with American performers: perhaps it was a deliberate travesty of the tango of the time.

Legends say that tango was marginalised, but it seems clear from the volume of surviving recordings, and from these images, that there was enough interest from people who could afford to buy a 'Victrola' and records to support the involvement of the music industry. Tango doesn't seem to have been hidden away in impoverished barrios.
Posted by Tangocommuter at 20:26

Last night at the practica someone said to me
"you don't really like electrotango do you?"
Er no, I sometimes joke that anything after 1920 is too modern for me. Thanks for these great clips.
The Tango Apache is interesting, like a violent polka; & who needs Tubatango when you can have that lovely old Gobbi!

Hola Cara Fea, and thanks for the comment. That Gobbi's a hoot, isn't it? Presumably it's French brass band, perhaps a military band. I wish I could find more of these very early recordings: there's something fresh about them, it was new, it was popular, they were starting something, and it's interesting to watch it coming along. It was the beginning of recording too, and they were right in there. I like El Esquinazo too: it's musically simple compared to later versions by Firpo and D'Arienzo, quite slow, but danceable: all three tracks could be danced to.

Yes, Tango Apache resembles polka, and polka is regarded as an ancestor of tango.

Electrotango? Haven't heard it for a long while!